Isn’t that what we always say? We want to do things differently, better than the year before. We make decisions to eat healthier, get organzied, get out of debt, exercise, go to church more, start various activities, and all of that is good, great even. Then as the year goes, we lose track of those goals, those decisions, and we simply go back to the way we did things the year before. I’m guilty of this, as I’m sure you are. After years of this, we grow tired and weary, and either stop trying at a

ll, or keep up in the same pattern. I’m so guilty of both of these things. So how do we change our ways?

We work at it a little at a time. Each day we can wake up and decide that today is the day that we will succeed on our journey. We will do all the things we set out, on that first day, to do. If we fail, that’s okay, just brush it off and get back up, and do it all again. How do I know this works? Because I’m living it right now. Let me share with you a little about how I’ve brought myself out of a dark place.

If you’ve read the Preface in Vengeance, or you know me personally, then you know a little about my life already.  But what a lot of people don’t know is the struggle I went through, basically alone, or at least I felt I was alone. Depression makes you feel that way, even
when it’s not true.

For four years, I was basically a shut in. I left my home only when absolutely necessary. I did the daily

things I had to do, took kids to school, made meals, took care of the kids in whatever areas they needed me. I did what I had to, and nothing more. Being stationary wasn’t my life before this time. I enjoyed going out and doing things. I liked being home, but leaving was never a problem.

We were foster parents, and though I took care of all the children as if they were my own, the truth was they weren’t. They had a real mom and dad. They had a whole other family that they would go back to on a weekly basis, then eventually permanently. Each time it ripped another little chunk of who I was away, until eventually I was nothing but a shell of a person, walking, talking, and somewhat functioning, but not really living.

Eventually, our now adopted, children were placed with us. I thought things would get better, maybe it did for a little while, but really it didn’t. There was too much worry, guilt, anxiety to change anything I was doing. Things for me got worse. I closed in on myself. I still did what I had to do, but I didn’t leave my house at all, unless absolutely necessary, and even then, I often had panic attacks and would have to return home, where it was “safe”. I was miserable, I’m sure, my family wasn’t much better.

So what changed? What did I do differently to move on and get better? Well, I’m not sure that what I did was the best thing, and may not work for others, but it w

The very first thing I did was to decide to get better. I knew that things weren’t right. I knew I was miserable and making my family miserable. I wanted that to change. If you don’t want a change, then change will not happen.

Two: I sought help. I went to my doctor, though that proved to be no help at all, even after multiple visits. Her solution to all my issues was to lose weight, and though I needed to desperately lose weight, that wasn’t the first step I needed. I went to a therapist next and that helped some, she gave me some ideas, that I tweaked into what I could handle. For example, she told me to journal.I couldn’t journal, but I could write stories. Oh, they were full of errors and some made no sense, but it got me using my brain, actively trying to get better. It wasn’t a quick fix by any means, it probably wasn’t even the best “fix”, but it’s what I had. I probably needed medication, but honestly, my doctor never prescribe anything, other than something for panic attacks as they happened. She never even mentioned depression as I told her my symptoms. But believe me this was and is depression.

Three: I moved. I know this isn’t something everyone can just up and do, and honestly it probably has very little to do with most people’s depression, but for me. The house that I once loved dearly, was a reminder of everything bad in my life. So whe I moved, it was like a heavy boulder, that was weighing me down, was removed, and I was able to breathe again. It wasn’t an instant fix, but things progressed much more quickly for me after that. I was able to go out without as much worry, I could sleep a little better, and as a whole was much happier. Plus, with the move I met new friends who had the same interests as me, kids the same age as mine.  I just felt like maybe I was worth something after all.

Four: I got busy. I started small by volunteering for one thing. Then that grew as I felt

comfortable to something else with more responsibility, and I just kept doing that until I am where I am today. I’m not saying that I’m perfect, or that I still don’t struggle. I struggle daily. I’m struggling today. Which is what made me want to write this blog post.

I’m tried of holding back, and I want to be a better me. I have new things going on in my life, in the next couple of weeks, that honestly have me a little worried and anxious. I know my family and myself will be better for these changes, but the first time at something is scary and hard.

So, how does this relate to my new year goals or resolutions? It’s another s 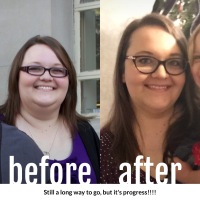 tep in the whole process, because permanent change takes time. I’ve been working on changing for five years now. I’ve lost about seventy pounds, and have improved my over all health and life, but there’s still much to be done. I would like to lose seventy more pounds, exercise more, I want my whole family to eat healthy, because if they learn how to eat well now, they won’t have the issues I have in their future. Most importantly, I want my walk with God to be stronger.

Starting next week, I’m going to start going to church on Wednesday nights. It’s not something I’ve done in years, but I’ve found a church that has some really good programs for my kids, and for adults. So, I’m going to give this a chance, not only for them, but for me. It’s scary, because I don’t handle change well, but I’m determined to just give it my all this year.

My hope in writing this blog is that this has at least helped someone. Maybe you don’t deal with depression, but you have a hard time with change. Just remember to take things one step at a time. Don’t expect perfect results immediately.

If your goal is to exercise, don’t beat yourself up if you miss a few days, just remember that tomorrow is a new day and try again.

If your goal is to eat healthier, don’t beat yourself up if you mess up at one meal or snack, you have a whole day to do better, and if it’s late at night, there’s always tomorrow. It’s not a race! Take it one day at a time and as long as you are trying, things will get better.

Leave me some feedback. What are somethings that you’ve done that worked to help you reach your goals?